Paving my own way 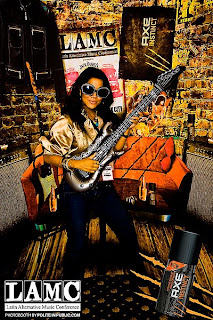 Recently when I thought about what to make my first post about, maybe not recently, but for a long time, I’ve wondered…what do I have to say? What is the essence of what I want to share? The perfect phrase came up to me at the Latin Alternative Music Conference (LAMC) this month, where I attended a  seminar titled: Paving your own way. The title was perfect for me because for some years I’ve been paving my own way in the arts.

When I first decided to start a music project I didn’t exactly know where I was going but I knew that starting it was better than not. It was right after college when I obtained my degree in Political Science and Latin American Studies; a Pre Law Major at NYU. Many times I’d sing in the cafeteria and other students asked me why I wasn’t in Tisch School of the Arts instead. I joked that I wanted to have a real career but during the middle of my college education I was presented with the opportunity to join an all girl band known as Las Chicas del Can. I grew up listening to their music and though I was a fan my answer was: absolutely not! There was no way I’d drop out of college after working so hard to be there besides, I thought… how many people from Washington Heights became artists anyway?  I didn’t know anyone at the time that became an artist from my neighborhood (that has since changed).
I went to the casting for the band when another person mentioned the opportunity to me. I was chosen on the spot. Instead of making the possibility impossible for myself I went to the counselor’s office at NYU and asked about a leave of absence. The process was very easy and I was allowed to take two semesters off. It was perfect. After about nine months of work and travel, I was ready to go back to school and the group was breaking up anyway.
When I went back to school and my office job, it was my boss that gave the CD I had recorded with the band to his guitar teacher, who gave it to his boss and he gave to his wife, a manager for Latino talent. For months she asked me to get pictures for the castings she could have me attend. I had no idea was she was talking about. Eventually, I got my headshots. I was on my way to booking commercials, voiceovers and industrials. Between politics classes and some science classes that I never understood, I’d take off  to castings and rush back to class or work.
My last year at NYU, I took an acting class and more vocal lessons and that is when I knew that I could actually pursue this dream that seemed to be pursuing me, asking me to give it a try.
I have since independently recorded a latin pop album and continue to do commercial and film and TV work in NYC.
Sometimes I think about what my life would be like had I not given the arts a chance and I can hardly picture it. The arts was always there, ready for me to pay attention to it. Is it easy and clear? Absolutely not! I think the arts is a little masochistic actually. Why keep doing it? Because it is so much fun to wake up with a challenge everyday and pave my own way.